Doug McGuff, MD became interested in exercise at the age of 15 when he first read Arthur Jones’ Nautilus Training Bulletin No. 2. His interest in exercise and biology led him into a career in medicine.

In 1995, Dr. McGuff moved to Seneca, South Carolina where he joined Blue Ridge Emergency Physicians with whom he continues to practice full-time emergency medicine.

Throughout his career Dr. McGuff maintained his interest in high intensity exercise. Doug realized a lifelong dream when he opened Ultimate Exercise in November, 1997, where he and his instructors continue to explore the limits of exercise through their personal training of clients.

In addition to his work at Ultimate Exercise, Dr. McGuff is a full-time practicing emergency physician who lives in Seneca, South Carolina with his wife of 30 years, Wendy, and their children Eric and Madeline. 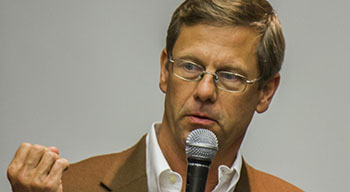